Clubhouse – New Kid on the Block but Well-behaved? 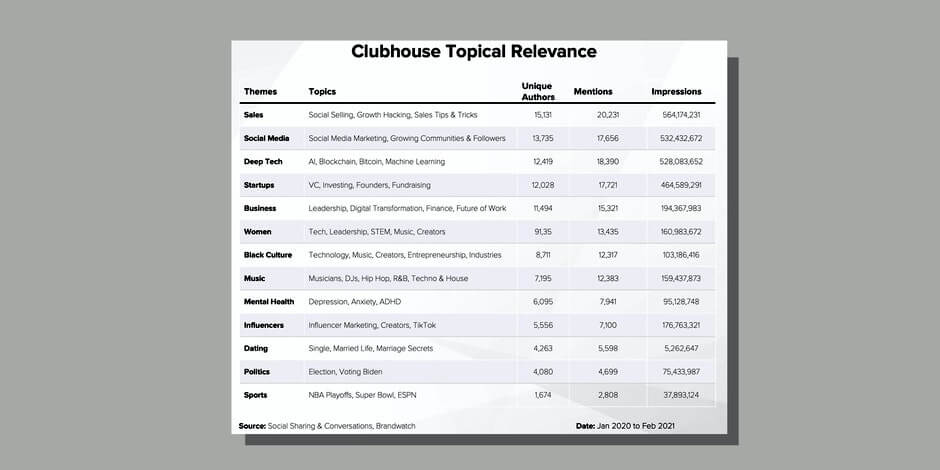 “Clubhouse is basically a glorified facilitator of conference calls, radio shows and telephone party lines from the 1990s”

LinkedIn has many 25-year-old wannabe life coaches and motivational speakers who are inspired by Gary Vaynerchuk and masquerading as professional marketers. So when they tout Clubhouse as the new wonder kid…

Now, enter the Clubhouse. According to Apptopia, the platform has been downloaded 4.7m times since its April 2020 launch – 3.7m (79%) of which have occurred in 2021 so far. The network also raised $100m in investment funding. Most significantly, Elon Musk and Mark Zuckerberg appeared on a Clubhouse talk show, further drawing attention to the app.

Clubhouse will go the same way as all the rest! Start off as a free platform then as it grabs more of the available social media market users will introduce levels of user membership, an ad platform for ‘added’ exposure etc etc.

Given that it has already garnered a reasonable user base and attracted a group of well-funded backers, the app might just succeed.

But how – if at all – should marketers use it?

First, a quick overview. Clubhouse is an invitation-only audio chat platform based on the use of public and private ‘rooms’. Anyone with an iPhone can sign up for the waiting list. People already using Clubhouse can approve their personal contacts in the queue to join.

I could then create either a public or private room for just about anything. Next, I could invite people I know who feel the same way about the topic or see who shows up. Then, we could all have a nice group chat about how much the ‘topic’ sucks. Up to 5,000 people can be in a room.

Substitute any topic and any group of people you know. That is Clubhouse!

Public rooms are listed in the app. Anyone can enter, and those who do so are pre-muted. Room hosts and moderators can speak as well as recognize anyone whose ‘raised their hand’. Private rooms, of course, require personal invitations.

Not surprisingly, Clubhouse has so far interested people mainly in the tech and marketing worlds – those who tend to be the earliest of early adopters. Zeno Analytics and Michael Brito posted an analysis this month of the most popular topics on the platform (see above).

How marketers should and should not use Clubhouse

In the end, I see little that is different or special on Clubhouse – at least in a marcom context. People tout the app’s audio-only functionality, but PR and sales teams would prefer a platform that includes video so they can read everyone’s body language. (Clubhouse did not respond to a request for comment for this column.)

So-called ‘influencers’ could, in theory, also hype products to audiences in chat rooms, but influencer marketing is most effective in categories that are very visual such as fashion and cosmetics. Audio-only would not work.

In a corporate marcom context, Clubhouse might be most useful for internal communications – especially at large, global companies and ad agencies. Remote teams could meet and talk. All employees could join a private room to hear the CEO give an update. It would certainly be more interesting than an email – and no one could mistakenly hit ‘reply all’ to the entire company.

Of course, the best business application is for so-called ‘content creators’ – basically anyone who releases anything informative or entertaining and has an audience – to use Clubhouse as yet another place to gain more followers. Many ad agencies and tech companies that are also still living in 2007 will want to do the same – even though it is largely pointless.

The top-ranking UK Facebook page for a local consumer brand?

The Cadbury Creme Egg at number 276. In country after country, was the same result. People follow mainly other human beings – celebrities, influencers, entertainers, politicians, bands and sports teams. Consumer brands were the last things that they cared to follow on social media.

Marketers are obsessed with media. The vast majority of non-marketing people are not. It’s why marketers immediately proclaim any new channel as the ‘next big thing’ – see Clubhouse – when the odds state that it most likely is not.

Yes, if you are selling something to the marketing or tech industries or are a bonafide famous person, then Clubhouse might be a good channel. But for everyone else, it is probably not – at least not yet.

Clubhouse will slowly open to more and more people and encourage them to sign up, create rooms and participate in other rooms. Later, the platform will create business accounts with added functionalities. Then, Clubhouse will create an ad network that businesses can use to promote their rooms.

The app will also create an algorithm that will feature the public business rooms that have the most engagement – those with the most attendees and most people asking questions. Marketers will then try to game the algorithm and thereby worsen the entire experience.

In a big shock that absolutely no one could have seen coming, Clubhouse will then no longer list public business rooms on the app and encourage them to buy advertising instead. The app will claim that the reason is that there are now too many public business rooms to list. Private rooms with more than a certain number of people will have to pay a recurring monthly fee.

And then Clubhouse will discover that private rooms are potentially the greatest generators of revenue for one simple reason: privacy means exclusion, exclusion creates desire and desire increases value.

Read full article: The right and wrong ways that marketers can use Clubhouse