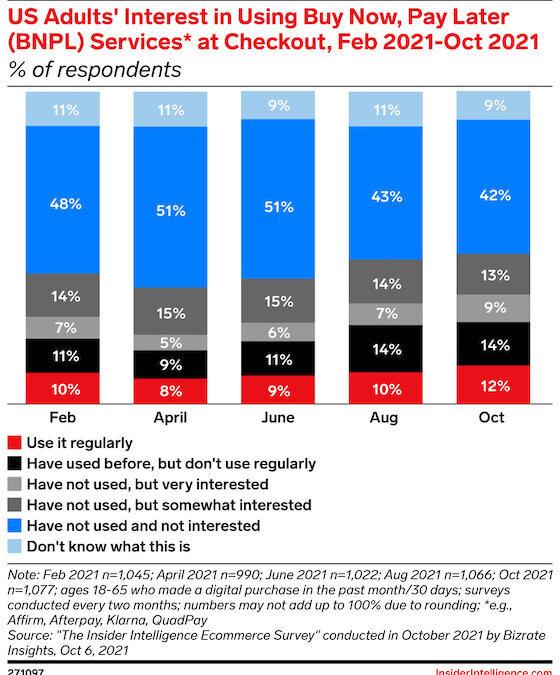 Shoppers are being encouraged to take advantage of buy now, pay later (BNPL) options to offset some of the stress from a shopping season marked by strong consumer demand, rising inflation, product shortages and smaller discounts from retailers.

Also there is a new trend emerging, BNPL is moving from online to in-store. This year, US holiday retail sales will hit a record $1.147 trillion with 81.6% of that coming from in-store shopping.

Although the figures shown are from US research as we all know, what happens stateside inevitably crosses the water and arrives on our shores here in the UK. So worthwhile considering!

Increasing the availability of BNPL in stores via retail partnerships will be critical to getting providers in on the return to in-person shopping during the peak holiday season.

Initial reports from Cyber Week indicate these strategies are working. PayPal CEO Dan Schulman said there were more than 750,000 BNPL transactions on Black Friday, a nearly 400% year-over-year (YoY) increase, while Afterpay reported a 34% increase in orders on Black Friday and Cyber Monday with in-store transactions up 442% YoY.

Technically, although many if not all, are interest-free and the attractive element of the option is the ability to spread the cost over a longer period they can cause concern for credit rating agencies and impact on credit reports.

The reports will include plan opening dates, the transaction amounts that users agree to pay, and the actual payment that is made. Similarly, TransUnion and Experian said they are working with BNPL providers to include more instalment-loan data in credit reports.

In the US, the Consumer Financial Protection Bureau recently opened an inquiry into major BNPL firms to determine risks and benefits of their solutions. If the data collected from the CFPB probe suggests that BNPL offerings pose risks to consumers, there will likely be targeted regulations for providers next year—which would be in line with our prediction. Efforts by credit reporting agencies like Equifax may support emerging BNPL regulation.

The Consumer Financial Protection Bureau (CFPB) opened an inquiry into Affirm, Afterpay, Klarna, PayPal, and Zip to determine the risks and benefits of buy now, pay later (BNPL) products, per a statement. The CFPB will work with international partners in major markets as part of the inquiry, and companies have until March 1, 2022 to report industry practices to the consumer watchdog.

Forty-four percent of US consumers have used a BNPL solution, and out of this group, 34% have missed one or more payments, according to recent data from Credit Karma. Of those who have missed payments, 72% say they believe their credit score declined as a result.

Surging BNPL use during the pandemic—when many consumers opted to use less credit and embraced flexible payments—was likely the driving force behind the CFPB’s probe. And the recent upswing in use over the holidays may have been the tipping point for the watchdog: PayPal reported a 400% year-over-year increase in BNPL use on Black Friday, for instance.

If the data collected from the CFPB probe suggests that BNPL offerings pose risks to consumers, there will likely be targeted regulations for providers next year. This would be in line with our 2022 prediction that the bureau would take a more aggressive push to ensure providers comply with consumer protection laws.

Regulators in the UK and Australia are also sharpened their focus on BNPL providers in light of data suggesting the risks involved with their offerings. Their moves could foreshadow what BNPL regulation might look like in the US.

Like most developments, there are pros & cons for both consumers and retailers.

It offers consumers a way to spread the cost over, usually 3 months. The benefit is clear; it is often said that if you can ‘afford’ any purchase, then buy it on credit.

Maybe not as relevant in recent times with interests rates at current low levels but in past times from a discounted cash flow perspective there was an advantage. It could still be a valid consideration with the ability of an interest-free loan albeit for a relatively short period.

The ‘cons’ may be more on the retailer’s side particularly if there are no real credit checks. It is more likely that consumers will consider a BNPL (buy now, pay later) option when the purchase is over a perceived value where even a split over 3 months could leave a relatively large balance after the first payment instalment.