In 2012 will Google change the way we market on internet?

Is Google becoming the competition? 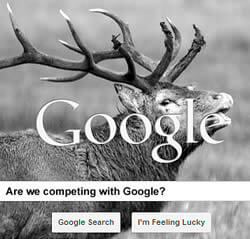 Brian Whalley, search marketer at HubSpot published a blog post on the HBR (Harvard Business School) Blog Network, entitled Google Will Change Web Marketing in 2012, forecasting some of the things Google is doing that will impact on search marketing in 2012 and beyond.

He highlighted three areas that will contribute to the changes outlined. Some of these have already started to impact and affect the way, that as marketers, we review our practices:-

The effects of this change, which will start to appear early in 2012, will be that for some searches it will no longer be necessary to click through to a website at all.

Data from the website, if it answers the question asked by the search, will appear within the search results themselves reducing the requirement to clickthrough and visit the website. For some marketers this will prove a costly change.

In an effort to minimise the impact Google and other search providers introduced a microdata format, last June, for marking up content which it is claimed will help website owners get better and more relevant rankings.

Not much has been seen or heard about it since and it is not clear just how much of a take-up there has been.

In an earlier post in June, How will Schema impact on SEO?, it outlined the impact it could have, particularly in terms of extra coding, and given the focus on load speeds could have a negative impact.

Google, itself is entering new markets and beginning to compete with its own search results. In 2010 it acquired ITA Software an airline travel software company and are an increasingly powerful competitor largely by promoting their own offers ahead of other providers.

They have the power and ability to do it and apparently are!

The data that Google makes available will be reduced.

As a search marketer we have already seen the effects of this in our analytics.

Last October, Google announced and rolled out a major change to the way its search engine interacts with the rest of the web. Google now uses an SSL-encrypted experience for anyone while logged in as a Google user and no longer passes these search queries through to analytics tracking software.

The net result is that there is a hole in our understanding of the terms being used to find content on our sites. Google estimated that it would make a minimal impact, only affecting 10-12% of search traffic but some recent comment has indicated that it could be much higher.

As an example, one of the comments on the post indicated that they were seeing up to 47% of keywords marked not provided on some client analytics.

Realising the impact it would have and the likely industry outcry it might attract they have made available in the new version 5 of Google Analytics, through Google Webmaster Tools, an aggregated listing of the missing keywords showing impressions/clickthrough rates.

Although useful and helps fill in some of the gaps they are only available for a rolling 30-day period but with no context relating to visitor behaviour eg landing page, navigation paths or time on page/site.

Is it, as some commentators have pointed out, a cynical development on the part of Google to increase its, already dominant, market share of the digital advertising space by encouraging more onto their ad platform so as not to miss out on valuable keyword data.

In any case, as indicated, some of the changes have already gradually been introduced during the latter part of 2011 and as developments unfold in 2012 we will all have to monitor and consider the impact these changes are having and come to terms with how to minimise their impact on both our own and clients search marketing strategies.

Have they had any impact on you already?