Google: Just had a personal call from Big G!

Google is not just an algorithm!

In general when we think about Google it is in terms of their size, their global dominance in search and the effects that changes to their algorithm, as we have seen recently, can impact on some major players in the digital world with what can be devastating consequences.

But Google does have a human face 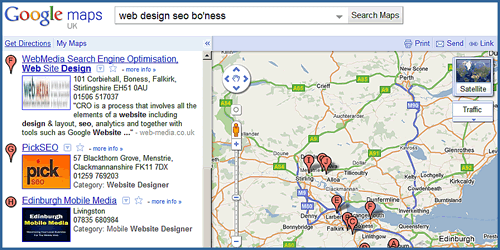 I can confirm that as I just had a phone call from them in the form of a very nice-sounding Irish girl asking if the address we had on our Google Places/Maps page was correct as, part of it was different than the address on our website!

I didn’t answer, as to my shame, if the number shown is withheld, unavailable or one that is not recognised, I don’t, as most are nuisance calls and time-wasting!

They clearly had checked the website, however, as within seconds they phoned the mobile no. shown there. And, this time, I must have felt their eyes on the back of my head, it was answered.

And, why did Google want to talk?

As a locally based company with the majority of our client base mainly in the Central belt of Scotland our Google Places page had been updated with the county of Stirlingshire added or I should say changed from West Lothian.

This seems to have caused the confusion as it still said West Lothian on our website and the question was asked which was correct. It has been updated on website now as well but…

Not sure whether my explanation made it any clearer as both addresses could be regarded as correct!

Using a technique popularised by an ex UK Prime Minister who liked to do things in 3’s I attempted to explain:-

Location 1: As now part of the Falkirk Council municipal area which has an FK postcode designation, Bo’ness is technically in Stirlingshire but Bo’ness continues to have an EH postcode which is Edinburgh and the Lothians including West Lothian. 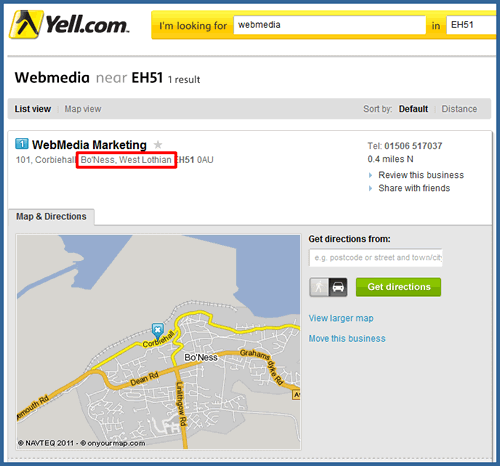 Location 2: Until local government reorganisation Bo’ness was in West Lothian and the Royal Mail still insist it is and any communication from them includes West Lothian as part of the address.

Location 3: Both Yell.com and Yellow Pages still consider Bo’ness to be in West Lothian.

Not a big issue as far as Yell is concerned as you can click through to website but with Yellow Pages your standard listing is entered in the Edinburgh and Lothians edition.

And, no fault of your own, you have to pay extra to be placed in your proper local directory. It effects every business operating in Bo’ness!

That’s it all crystal clear then!

I can’t really see what the problem was but I’m glad I did answer the second call and hope the explanation did make it crystal clear! And, it must have as she agreed that she would just leave the address as it was.

At this point not sure what she or Google would have done had it not been as clear cut but it does prove that the Big G does watch what you are up to, even on your Places page, and it would appear regardless of your size. So be warned!

Has the Big G every called you to say hello or had a similar call?