Facebook: The young don’t want to be a friend of your brand!

The younger generation know what they want from social media

…and it’s not good news for big brands 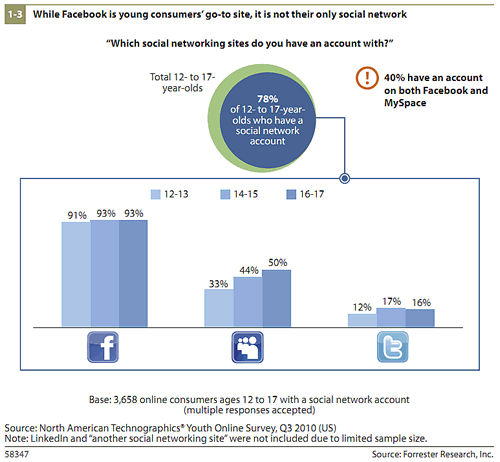 Young people use more than one social site

Although almost three-quarters of 12-17 year olds use social networks to talk about items and products with friends and often make recommendations, almost half of them don’t feel brands should even have a presence on social media sites or be using social tools at all.

It’s bad news for brands to find out that young people don’t want to be their fans particularly as many were focusing on the possibility of connecting with just about each and every consumer by using the magic of social websites.

According to a new survey from Forrester Research, and despite the reality that 50% of the surveyed demographic uses Facebook, just 6% of 12-17 year-olds have any desire to make friends or become fans with a brand.

That figure does double in the 18-24 year-old age group with 12% of them being ok with liking brands but the vast majority of young adults have little interest.

What is more scarier for brands is the realisation that young people don’t want their friendship, and even believe they should go away, making the research an even more worrying situation for them.

Jacqueline Anderson, Forrester’s Consumer Insights Analyst, author of the report wrote, “Many brands are looking to social media as a strong digital channel to communicate with these customers, because it’s where 12- to 17-year-olds are spending so much time.

“But analysis shows that it really is important to think about a lot more than just consumers’ propensity to make use of a specific channel: Virtually half of 12- to 17-year-olds don’t feel brands should have a presence making use of social tools at all.”

Forrester surveyed 4,681 Americans aged 12-17, on the web in September 2010, Understanding The Intricate Digital Behaviors Of Young Consumers, revealing what might be considered some surprising and unexpected results.

So what should brands be doing?

According to Forrester’s report, they might be better off becoming more reactive than proactive and they should be listening.

Just 16 percent of young, potential customers expect brands to use social media to interact with them and 28 percent expect those brands who do, to listen to what they say on social sites and communicate with them.

However, it might not be all bad news for all brands. It just might depend on the brand itself!

Would you believe it! Looks like young people know what they want from social media sites – social engagement not brand promotion!